It Wasn't A Lack Of Vision That Sent Project Into Tailspin 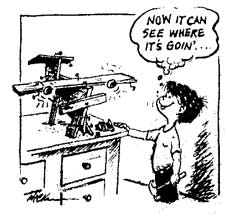 Older people are always saying today's kids don’t know how to make their own toys to play with.

"When I was young," they say, "I spent hours playing with an old orange. Or a block of wood. I build little cars from spools. I cut rubber strips off innertubes and made slingshots.” “Nowadays that won't work. Those spoiled brats insist on electronic toys. They want things that will run for 15 minutes and then break. They don't know what to do with themselves." Such stern appraisals are wrong, and I can prove it. Consider the case of Michael McDaniel and his homemade airplane.

MICHAEL IS ONLY 4 years old, but the spirit of do-it-yourself is alive and thriving in him already. Give that kid a chance and he can perform wonders. And his chance came on a Saturday morning His father, a lawyer, was working at the office. His mother was busy with household matters, somewhat complicated by the fact that a man was putting down molding in the hall. But did Michael complain that he had no new toys to play with? He did not. He spotted the odd bits of molding that had been sawed off and left to be thrown away, and he had a fine idea. Why not make an airplane?

SO HE SET to work with hammer and nails and molding, all enhanced by the splendid imagination. He would make a fine airplane. Some the molding cracked. Michael was undaunted. He got the household cement and used it to put together the cracked parts and perform other functions necessary in airplane-building. His mother was vaguely aware of the project, but that was about all. You don't interfere with a craftsman when he is busy.

AT ONE POINT, it is true, they exchanged a few words. Mrs. McDaniel is very clear about that.

"He came to me with one of my husband's contact-lens cases," she told me "He said, 'Mommy, this is empty now. May I have it?' And I said, 'No, your daddy needs that.’ So he put it down." WORK BY ALL hands continued in relative peace and quiet. It was only later that Mrs. McDaniel noticed something strange. The man had finished putting down the molding, and she was seeing him out, and on the way back she glanced at the bar in the kitchen. There sat Michael's wonderful new airplane, waiting for the glue to dry. It was a fine airplane, about what you would expect of a talented 4-year old working with wall molding, but one feature of was notable. On the wings, one on each side, were headlights that gleamed softly in the cheerful room.

A TERRIBLE THOUGHT crossed Mrs. McDaniel's mind. She hastened over to the bar and discovered that she was right. The headlights were little convex plastic circles. They were, in short, contact lenses. No wonder Michael had said, when he asked for the case, that it was empty.

AFTER THAT ONE gleaming moment of triumph, the story goes rapidly downhill. Mrs. McDaniel pried the lenses loose from the hardening cement and tried frantically to clean them. She couldn't. She called a pharmacist, who advised her to forget it; if she did managed to get the cement off, she would ruin the contacts in the process. The contacts, in short, were beyond repair. And Mrs. McDaniel had to call and give the news to her husband, who was not entirely amused. And the airplane had lost its headlights for good. And even with the insurance, it turned out, replacing the contacts would be costly. As for Michael - well, if you were a budding aviation engineer, how would you like to have to pencil in an overnight stay with your grandmother as a safety precaution while the heat died down? When you stop to think about, there's a lot to be said for electronic toys after all.